Soon, 1920 during the sports association DAC, that is Dunaszerdahelyi Athletic Club re-formed as. The DAC has mostly been involved in friendly matches, the only one to get into a league for the first time 1927/28entered in season. It didn't even take long to get to the first league title, because it is 1930They won the first place in the first class of the championship organized by the Hungarian Football Association in Slovakia. The 1930/31They finished in last place here this season, and due to the reorganization of the league, the next league year was continued in Group B of the second division of the Western District Championship. After earning the championship title here, they were in the first division of the Southern District Championship.

The 1933/34the club changed its name again this season, Dunaszerdahelyi Torna Club (DTC) they again fought for points in the second line as.

The 1938As a result of the Vienna decision, the championship was interrupted, and the teams from Csallóköz and Mátyusföld established a temporary championship for the transitional period. 1939in the Kisalföld Subdivision, 1942and (already called DLE - Dunaszerdahelyi Football Association) in the second class of the Győr District Championship. The 1943/44season, this tournament was divided into two groups, with DLE being placed in Group A. The team closed the fall season in first place, but due to the war situation, it never continued.

Restructuring the club 1946but its name changed almost every year (Spartacus, ŠK, Dunostrov, DŠO Sokol, Slavoj). His situation was aggravated by the fact that the larger factories in Dunajská Streda established their own team, so in addition to Slavoj, the Stavokombina in Dunajská Streda and the Dinamó team also played championships. 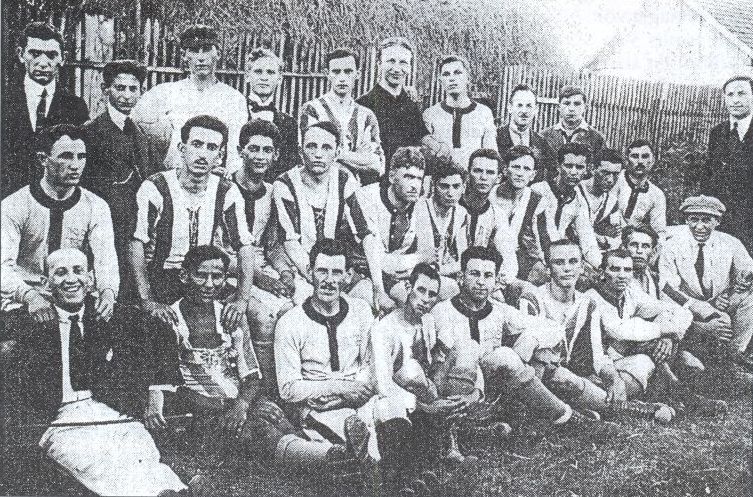 1919. Dunaszerdahelyi SE - Komárom FC 2: 2. Players of the two teams: DSE in a single-stripe and KFC in a multi-striped jersey.